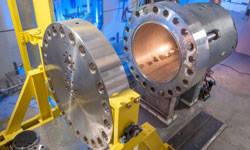 Microcircuit, created for the Venusian “hell”

Many scientists, researchers, astronauts and dreamers are trying to conquer Mars, it would seem, nothing surprising, but after all Venus is much closer to the Earth. Maybe we have to start studying it first? But the problem is that Venus has the highest temperature comparing with the other planets in our Galaxy, and besides, its atmosphere does not allow to work on any earth instrument for more than a couple of hours. But, if a person decides to master outer space, then any obstacles can be overcome, especially since ultra-modern, reliable microcircuits, transistors and other RECs have already appeared.

Scientists working for the NASA aerospace agency presented them with the newly developed computer chip, which can operate under very high temperatures and under considerable pressure in aggressive environments. The chip without any cooling or protective shell was tested under conditions close to the Venusian one. The last scientific module was launched on Venus in 1982; it had been working there only a few hours. Americans are confident that by 2023 it will be possible to create a microprocessor that will withstand the temperature of Venus (+ 464 degrees Celsius).
To understand which chip is necessary for the study of Venus, you need to understand some of the nuances in the manufacture of transistors and semiconductors. Semiconductors are made mainly of metals that pass an electric current having a significant resistance. Semiconductor conductivity can be changed, making of them transistors, which are small “gates” for the input of electric current. Microchip is an integral part of the chip, which is combined into a semiconductor with the help of wires and transistors. Scientists explain that the main problem of terrestrial microchips is that they cannot withstand the atmosphere of Venus, since they are created on the basis of silicon, but under conditions of a hot planet, silicon becomes a conductor, losing semiconductor properties.
The chip, created in NASA, is made of silicon carbide. This material, even in aggressive environments and at high temperatures, preserves the properties of the semiconductor. Also other components of the compound consist of tantalum siliceous (a material capable of standing under extreme temperature conditions for a long time).

Tests of the chip

A unique chip is needed for transmitting of electrical signals from Venus to the Earth. Its tests were carried out inside a special installation “GEER” (Glenn Extreme Environments Rig). This highly toxic “oven” with high pressure inside it can create conditions that are reminiscent of the atmosphere of Venus. The microchip successfully withstood all the tests, showing that it is within its power to conduct on Venus, performing its work for almost 21 days.

Improving of the chip

Of course, we can rejoice that we will soon learn more about Venus, but the technology continues to improve. Today the microchip includes 24 transistors, but for stable operation it is better to create a chip that would consist of at least hundreds of transistors. The scheme of such a component has been already developed and hence the Venus mission is quite feasible in the near future.