History of the development of radio communication 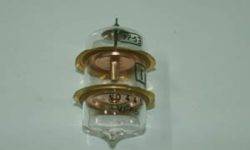 The appearance of the word “radio”

More than a hundred years have passed since the moment when radio communication appeared. Many scientists from different countries contributed to the development of this important innovation. But only one person, A.S.Popov is called to be the inventor of the radio. 1895, the Russia scientist A. Popov established communication in the Gulf of Finland between two ships. His device was so effective that some new directions appeared in science and industry, as well as new terms “radio”, radio engineering, radio components, radio electronics, radio communication and others.

The meaning of the term

“Radio” as a term appeared to indicate a way of transmitting various messages over a distance using radio waves. “Radio” comes from the Latin word “radius”, meaning “ray”, “radiation”. A little earlier the word was used in physics, as a prefix to other concepts, for example, such as a radiometer.

The radiometer was created in the form of a pear-shaped vessel, inside of which was a spinner on an acute needle, consisting of four sooty mica lobes. It was rotating like a compass, when it was hit by light or X-ray. Appeared this device in 1874, and it is believed that the “radiometer” was the first word in which “radio”, as a prefix was used.

Alexander Bell, the first inventor of the phone, was also involved in the advancement in science of such a concept. He conducted experiments, during which it was discovered that bodies in any of the three aggregate states produce a sound when they are directed by intermittent light or heat rays. The device that reproduces such phenomena is called a “radiophon”.

After the experiments conducted by Crookes, sixteen years later, physicist from France Edouard Branly applied the concept of “radio” to electromagnetic waves when studying the interaction of the resistance of a metal powder with an induction coil. He called his device a radio conductor, which later English physicist Sir Oliver Lodge improved and called “coherer”. This was the name of the prototype of the device until 1898. But in May, 1898 the word “radio” (the device was named in the English scientific journal) returned.

1903, the First International Conference devoted to the wireless telegraph took place, where the word “radio” was used. But only three years later, in 1906, it was suggested to use the term radio for wireless data transmission. Finally this word began to be used everywhere from 1917 onwards.
Nowadays, we use the concepts of radio communication, radio engineering, radio components almost everywhere, where there are electrical impulses, electrical signals, in telephones, TV set. Although more modern devices use boards that do not resemble the old radio components.

« Types and kinds of connectors
The condenser is edible! »