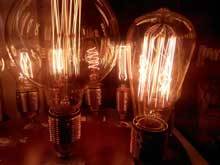 In this age of energy conservation, LED light sources based on diodes were increasingly used, instead of the usual lighting, which was based on incandescent lamps, as well as on lamps containing mercury. LED light sources are more economical, have a long service life, are characterized by increased safety, less heat loss, and also harmonize well in modern interiors and, in case of recycling, do not require special precautions as with lamps containing mercury. Not surprisingly, the popularity of LED light sources is growing every day.
Large LED light sources, such as LED panels are used in many locations and people’s stay: sports clubs, shopping centers, office, industrial, warehouses and other public places.
LED panels were first used as a light advertising instead of neon, which was inferior as information and color reproduction.

The design of the ceiling light-emitting diode panel device is different from the simple ceiling light in that the LEDs can occupy either the entire panel area or the perimeter, which creates more diffuse light. Panels are made of aluminum, this allows for rapid removal of heat from the LEDs. On the lens with the notches, under which there is a reflecting film, light coming from the diodes, it is reflected perpendicularly, which distributes the light flux evenly.

Ceiling LED panels are considered new-fashioned, but despite the novelty, they allow at times to save on electricity costs compared to lamps containing mercury, which allows more completely changing the lighting system in the places where people live and stay.

The ceiling light-emitting diode panel in the size 60 on 60 centimeters is easy in installation, consumes only 40W, will allow to save quantity of lamps, it is safe and will serve at least 10 years.

Many experts have recognized that the ceiling LED panels are the best solution for the premises, offices and other places where people stay, and they can also create comfort and coziness for people.