A gas mask and its types, the history of creation

For more than a hundred years, gas masks have been an excellent protective agent, preventing the ingress of various harmful substances, including poisonous substances into the body. There are a lot of types and brands of gas masks, but they are all divided into two large groups.

In this type of device a special box is used, in which the filter itself is located, which can prevent some harmful substances, various suspensions, dust, sand from entering the respiratory tract. It all depends on the filter class (low efficiency, medium effective and maximum efficiency filter). Filtering gas mask makes it possible to breathe a person with air purified with the help of the catalyst substance contained in the box. Such an apparatus can protect a person from certain threats. The filter in the box is not universal and the service of life is quite small. We will buy filters from gas masks in unlimited quantities.

It is a device more reliable and versatile; it includes a special compression box with an oxygen-insulating catalyst. It helps a person to breathe normally in conditions of acute shortage of oxygen. This type of gas mask is divided into two types; Self-contained breathing apparatus (has a compressor box with a compressed air cylinder) and a hose respirator (air comes from outside, e.g. a compressed air line).

In the field of use, a gas mask can be

The First World War brought humanity to the need to protect the body from poisonous substances, which, in fact, were first used by Germany; also Germany is the country that created the gas mask. The device was first used in 1915 by German troops during its own chemical attack on the enemy, to protect its soldiers from chlorine-containing gases. The gas mask was made of rubber, and then made of rubberized tarpaulin. The filter was small and screwed directly to the mask, and the mask was equipped with two eyepieces. 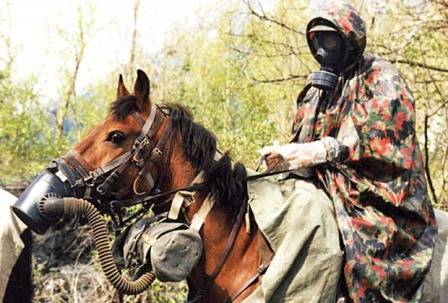 The first Russian gas mask, in which activated charcoal was used as a filter, also appeared in 1915, thanks to the Russian scientist, chemist Nikolai Zelinsky, who invented a unique filtering system. Around the twenties of the last century, the Institute of Chemical Defense was opened in Moscow, where they developed and tested various new tools that could help a person survive chemical, nuclear and other types of infections. The Institute designed protective equipment not only for the needs of the army, but also for civil adults, infants, adolescents. Perhaps you will not believe, but since 1928 there is also a gas mask for horses, which at that time were the main “carrier” of weights, especially in the army. And in 1932 the dog masks were also adopted. Today, both horse and dog gas masks can be seen only in some museums.

« Light-emitting diodes
All about silver »