The device EVD and its application 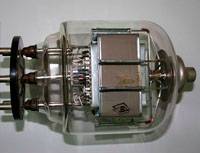 The vacuum tube is an electrovacuum device (EVD) that operates according to the following principle: in an enclosed vacuum or rarefied gas space, an intense flux of electrons is created. To control this flow an electric or magnetic field is used. The electric current, which is flowing through the vacuum, has many useful functions the electronic lamp generates, amplifies the electric oscillations of different frequencies (sonic superhigh frequencies, radio waves). The design of the radio lamp consists of a cathode, an anode and a grid.

A negative electrode which, in order to provide emission from the electron cathode, is been further heated, and in order for the emission to pass more easily, a thin layer of thorium and barium is deposited on the cathodes. The metal cathode, used in high power lamps, is made of tungsten.

It is a positive electrode. It can have the shape of a plate, but usually is produced in a cylindrical shape or in the form of a parallelepiped. Anodes are usually made nickel, molybdenum, but can be also made of tantalum or graphite.

The grid separates the anode and cathode, protecting the last one from overheating. The grid can be in the form of a lattice or a spiral (more often).

The emergence of an electric current flowing in a vacuum was discovered by Thomas Edison (1883). But it was irrelevant in those days. There was no application of this effect. But by 1905 John Fleming had created an electronic lamp (diode), which transformed the alternating current into a constant one. There was a lamp of two metal electrodes: an anode and a cathode, enclosed in a glass bottle. Then, after experimenting with a simple lamp, Lee de Foreste introduced the third element of the lamp – the grid. Subsequently, electrovacuum device was modified in order to improve the characteristics of the instrument.

Since the early fifties and until the nineties, vacuum tubes had been used in virtually all areas of the electronic, technical industry. Without them it was impossible to imagine television sets, radios, industrial and other equipment, and, of course, the first computers and calculating machines. Over time, with the development of radio electronics, precision instrumentation, the lamps have practically lost their relevance and became useless.

The military-industrial complex cannot work without EVD, since only the vacuum lamp is resistant to electromagnetic pulses.

Aviation and rocket production. Many semiconductor materials, RECs are not able to work under high radiation conditions, in space where there is a natural vacuum. Some types of ЭВЛ help to increase the reliability and durability of space rockets and satellites. Lamp devices can operate at extremely high temperatures and high radiation levels.

Today, in the age of nanotechnology development, the widespread miniaturization of various electronic devices, many believe that vacuum tubes are hopelessly outdated and their use is not cost-effective. I must say that this is a fundamentally erroneous point of view. Of course, EVD no longer has such an important role as before, but still in some devices it is simply irreplaceable.

« Dismantling of the automatic telephone station
Types of accumulators »