The history of the appearance of an automatic telephone exchange 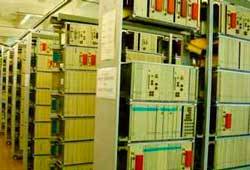 History of the emergence of automatic telephone exchange

It is difficult to name the absolutely exact date of the invention of an automatic telephone exchange (ATE), even the year of its appearance varies from 1887 to 1889. Why is it so difficult to determine the time of its appearance? It’s simple – historians, as usual, find it difficult to answer which of the inventors first invented it. Tell you a few versions. The beginning of the appearance of telephony is the hand-held switch. Many know that the very first phone was invented by the American scientist Alexander Bell; the date of the historical discovery, which helped mankind to communicate with each other not through fires and bells, the year 1876, February, 14 is known. And already in 1878 it became significant, in that the first manual switch (telephone exchange), which could serve the 21st subscriber, started its work. “The Pioneer” was a small town in Connecticut (New Haven).

Telephone sets improved, communication developed at a rapid pace, an increasing number of people wanted to have phones at home. Mankind has become accustomed to innovative, rapid receipt and transmission of information. It was no longer necessary to leave the house, from the office, to communicate with friends, to appoint a business, and just a friendly meeting – everything happened at a distance. Many sought to establish not only in the offices of telephone sets, but also at home. The number of devices, as well as the growth in the number of subscribers, increased, but the old hand-held telephone exchanges could not cope with the work, because live people worked on the switches – young girls, it became increasingly difficult to serve customers. By the way, in those days only the young girls took the switch with the operator of the switch, with a pleasant voice and long arms. You will not believe it, but the girls had to have hands at least 150 cm long so that they could reach the far nests by switching the plugs. And it should be done quick without confusing the names of connecting subscribers.

With the passage of a short time, the number of subscribers at one similar station grew from a hundred to a thousand. It’s hard to imagine how the operators had to work – they had to remember the names of all the clients of the switch. The situation had to be changed somehow, and as everything, at first glance, complicated, the solution of this problem was found in a perfect simple idea. The system was based on the system of a successful and popular American doctor – he assigned a digital code to all his patients, that’s how one telephone station arrived in 1879, and other switches followed suit. So there was a phone number, this numbering system has been preserved to this day.

The invention of a two-motion step-by-step switch

By the way, to the creation of the first automatic telephone exchange, one more person indirectly “put his hand”, which cannot be fully called a physician, but still it was Alman Strouger, who owned a funeral bureau (in Kansas City, America). History tells that his business flourished as long as the wife of his competitor did not get a job at the switchboard, it was this woman who directed all calls to Strouger’s company to her husband’s office. Naturally, Alman did not like this at all, he did not want to put up with such unfair competition and invented and patented the ten-stepper searcher, which, in fact, became the prototype of all modern automatic telephone exchanges. It happened in 1889, and three years later Strouger left the funeral in order to open a company called “Stowger Automatic Telephone Exchange Company”. The company exists until now, but has a different name “Automatic Electric Company”. Two-motion step-by-step switch was simple and reliable in operation; therefore in the future it was used by all ATEs.

But the history of Strounger’s development of the two-motion step-by-step switch is disputed by some historians who proved that the TMSBSS was created in 1887 (that is, 2 years before the American) by the Russian inventor Mosnitsky, who invented the “Self-acting central switchboard”, which did not require the presence of an attendant.

« Carbon instead of silicon in the computers of the future?
Thermoresistance (thermistors) »