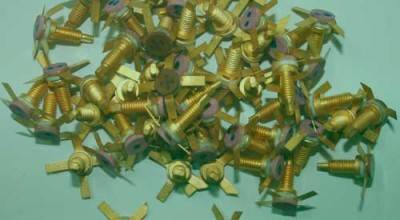 Transistor. History of the invention.

The invention of a transistor is rightfully considered one of the most significant. Transistors have replaced electronic lamps, which for a long time were the only active components for all devices in radio electronics.

The first working transistor was introduced in 1947 by employees of one of the American companies – Bell Telephone Laboratories, in 1956. The transistors didn’t become wide-spread at once. Manufacturers of electronics were skeptical about this little device, and for almost 30 years manufacturers of electric lamps did not notice the competitor. At the very beginning of its “life” the transistor was manufactured using Germanium, as a semiconductor, and then silicon was used to reduce the cost, which is more common in nature.

This type of radio components is called “bipolar” because the electric current is formed in them. by an electric charge of double polarity – positive/negative. A carrier of a positive charge is called a “hole”; a negative charge is transferred by means of electrons. In bipolar transistors, crystals are used as semiconductors both from germanium and from silicon. Both versions of the transistor have different characteristics, which must be taken into account when creating devices.

It is a semiconductor radio component in which the current formed by the motion of holes and electrons between two electrodes. One more functional part is an electric field created by the voltage of the third electrode. Two electrodes, between which there is a controlled electric current, are the source/drain. The source is the electrode that gives out the charge. The control electrode (third) is the gate.

Today, a bipolar transistor is widely used in the creation of analog electronic devices, as an amplifier in a discrete circuit.