In order to significantly reduce the consumed electrical energy, you can resort to installation of LED motion sensors, (or, as they are also called, “passive infrared sensors”) in rooms, apartments, offices or streets. To date, due to the environmental situation, and also with the purpose of saving resources for future generations, the most urgent problem is the use of technologies aimed at energy saving in everyday life. By the way, the economic factor is also important here: the price for electricity grows disproportionately to the financial possibilities of the population.

Motion sensors, using LEDs, are designed to close the power circuit when motion occurs, whether it is a person or a car, in the sensor control area. The device can be used both outdoors and indoors, depending on its performance.

The household motion sensor works on the principle of “constant monitoring of infrared radiation”, carried out in a certain tracking zone. When in its field of “sight” an object with sufficient mass and temperature that exceeds by 5 degrees Celsius ambient temperature falls, the thermal field in the control zone changes. A special lens, called the Fresnel lens, sends a signal to the photocell which allows the mechanism closing the electrical circuit to operate.
Active and passive zones in the infrared field alternate in staggered order, which makes it possible to operate the device even when the movement in the controlled zone is insignificant. This system is easy to use when switching on / off lighting, ventilation systems, and air conditioners. The response periods are regulated and depend on the model of the device and its purpose.

Before you buy motion sensors, be sure to determine by several parameters: 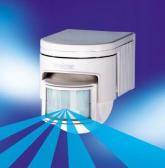