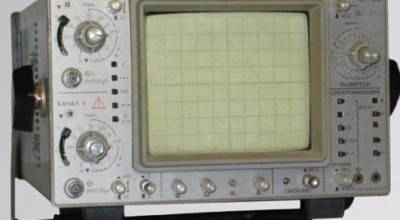 The name of device “oscilloscope” (translated from two languages (Greek and Latin)), means “swing/write”. The device is designed to examine, observe, measure and record the amplitude, time parameters of electrical signals that are output at the input, on the screen or recorded on photographic tape. The modern oscilloscope can read the signal of Giga HertZ waves.

Oscilloscopes belong to the measuring items, which are designed to study the temporal amplitude oscillations of electrical signals. The device is used in many areas to control signal quality.

Initially, the electrical oscillation processes were fixed in a paper version by hand. The first person who decided to automate the process was Jules François Joubert (1880). He determined that the signal should be registered step by step. The method of Joubert was developed and improved by the Russian physicist Collie and the Frenchman Blondel, respectively, in 1885 and 1893. The first oscilloscopes had a large inertia, which did not allow recording fast processes. This drawback was eliminated by William Duddell, who created a light-beam oscillograph in which a mirror was used as the measuring element, and the readings were made on a special plate sensitive to light. The top of the method development is a multichannel tape oscilloscope. 1899. I. Zennek added to the device a horizontal sweep, which made the device more appropriate to the modern oscilloscope.

Logic of work and purpose

The device is classified according to several indications.

The working principle of the device.

According to the development of oscilloscopes, they are divided onto:

The oscilloscopes are also compatible with other measuring devices. The oscillograph can be used not only as an autonomous device, but also as an add-in device, for example, to computers, like an expansion card, or with connection to an external port.

– The development block is horizontal, which generates a periodic/single signal, which linearly grows, and then rapidly decreases.
– Amplifier input (investigates the signal at which the output is connected to the deviation plate along the vertical).